WOODS HOLE – Nicole Gabai is an affable cheerleader type. All perk and positive encouragement, the consultant came to the creatively disheveled office of the Woods Hole Film Festival ready to straighten up, clear out and most important – organize.

Laster spends months prepping for a frenzied eight days every summer. The organization’s office – a cramped spot above the Woods Hole Market on Water Street – was stuffed with festival merchandise, props, all manner of film production equipment and paper, paper, paper.

The space – which also serves as an office for a local architect, a landscaping company and a flip-flop distributor – needed to function as a boardroom, an editing suite, a reception area for filmmakers and media, and a storage space.

But when Gabai showed up on a Sunday morning this spring, it was more funk than functional.
”We’ve organized mostly by the clump method,” Laster explained to Gabai, a professional organizer and owner of the Falmouth consulting firm B.Organized.

They peered around the 14-by-12-foot room at an endless number of plastic containers overflowing with T-shirts or DVDs or extension cords, stuffed next to old boxes, unused furniture and a glass head.

Gabai, who had already launched into her organizational doctrine calling for things to be designated to different zones, listened politely.

”We put things that go together in clumps. It’s similar to piles, but they’re in plastic containers,” Laster deadpanned. ”A lot of people relate to clumps.”

Clumps, piles, whatever she wants to call it, Gabai saw a knot waiting to be unwound.

And a lot of junk that should be in a Dumpster.

Gabai, who started her career working in television production at MTV, ran her organizational consulting business in New York before moving to the Cape last year. She’s spent years developing a questionnaire to determine exactly what a client will need to get a business in order.

For the film festival, like many businesses, they needed a process for their paper. The festival pushes a lot of it, from brochures to tourist pamphlets to press information.

”It’s really like, what do we do with all our old paper?” Laster lamented, after Gabai asked about boxes full of paperwork.

”Is there a reason to keep it?”

Laster was a tough cookie. But Gabai didn’t relent. She started dismantling.

”Sometimes a space will get messier before it gets neater,” she said.

Gabai grabbed a stepladder and took boxes off high shelves. She moved piles of stuff around the Smurf blue floor. She cheerfully ticked off the rules.

Gabai travels with her own label maker – the Brother P-Touch that she recommends to all her clients. Only $39.99. Available at Staples.

Gabai was not fazed.

She could see Laster’s desperate attempt to calm the madness around her – a sarcastically threatening sign declaring the space a ”no-rummage zone,” demanding that the cast of volunteers who run the festival keep away from the stuff rather than dive into things to find what they need. She knew Laster needed a real system.
”I believe if the system is clear, everyone can follow it,” Gabai said.

A toss pile grew. Priorities were set. Suddenly, the communications station with a fax machine and space for walkie-talkies emerged from a corner where it was once buried.

The pair took an interior design break to hang a 3-foot-wide coffee-cup-shaped clock – a prop from Laster’s film ”Automatic Drip” (a movie about coffee drinkers featuring zombies). It had been wedged in the midst of an extensive DVD and VHS collection. Now it was a focal point above the festival’s computer.

Laster almost got into it. She acted vaguely disappointed when the labeler ran out of tape.

”It’s not an insurmountable challenge.” 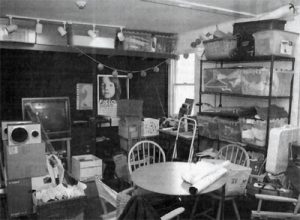 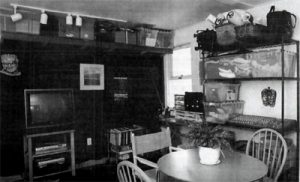 Weeks later – after Gabai and festival folks spent hours tossing and rearranging – the cozy office looked spiffy. The shelves were neat. Some old, unused equipment was set aside to be given away. Floor space had emerged where there were once ”clumps” of miscellaneous stuff.

The unruly piles had been tamed for the most part, although Gabai was still prodding Laster to junk some of the old paperwork. But it’s starting to get close to the festival time, and free time for organization has all but dried up.

Gabai’s still proud of the process, which has made the space function better. The true test will be when the festival begins July 29.

”Sometimes you have to convince the client to take their medicine,” she said.

Sign up to be the first to know when my new book is launched! Thank you for your interest in B. Organized.